As you may know, there are many Disney-themed collectible globes and maps. If you check out sites like eBay, you can find a few good examples.

This one is assembled and glued on a piece of cardboard and finished with a nice frame: 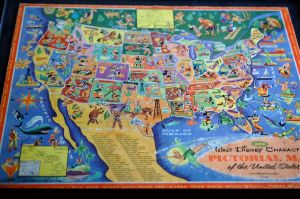 Made by Jaymar for Walt Disney Productions

Like the Disney globe from another post (click and check it out!) I am not sure what year it is from, but as Hawaii is included as a state, it was made during or after 1959.

Also, Disneyland is very prominently displayed in California, and there is no indication of Walt Disney World in Florida, so it was very likely before 1971. 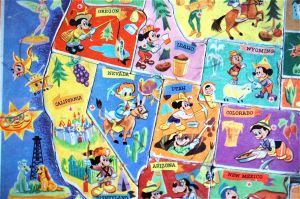 While not in the best of shape, with pieces peeling, some seemingly missing bits, and pencil marks, it still looks great if only for the graphics of our favorite characters: 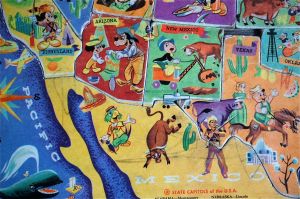