BOOK REVIEW: A Visit to the New York World’s Fair

Fans of all things Disney will no doubt know of the importance of the 1964/65 New York World’s Fair to Disney Theme Parks. It was at this fair, for which Disney created four shows, that the “Audio-Animatronics” and “People Mover” ride systems were designed and perfected.

So this children’s book is an interesting find. You may wonder if any of the Disney pavilions are included within its pages. Let’s have a look and see!

Published by Spertus Publishing Company in 1964

The book is filled with lovely illustrations but it doesn’t look like there are a lot of references to Disney right off. 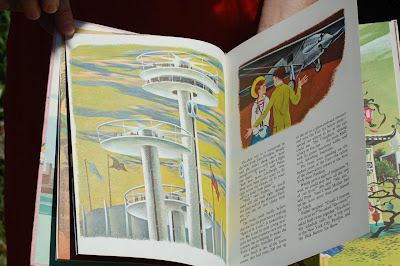 But finally, as the pages are turned, a piece of Disney history is illustrated in this great book. Ford Motor Company presented “Ford’s Magic Skyway” (a WED, now Imagineering designed pavilion). It included an early prototype of what would become the People Mover ride system. The ride moved the audience through scenes featuring life-sized audio-animatronic Dinosaurs and cavemen.

Indeed, the book even refers to this as “a Walt Disney wonderland of Past, Present and Future“.

But wait, there’s more! Next came a look at “It’s a Small World”!

At the Pepsi Pavilion, “Pepsi Presents Walt Disney’s It’s a Small World – a Salute to UNICEF and the World’s Children” (whew!) was featured. I think we are all familiar with “It’s a Small World”, but if not, it features animated dolls representing the world’s children and animals, and a song by the Sherman Brothers which, if you’ve started to hum it, will be stuck in your head all day now.

Quote: “In each country they passed, thanks to Walt Disney, they saw animated figures of children dressed in picturesque costumes-and there were even the right animals for each country!”

And how much would you pay for this little “time machine”? It probably doesn’t matter as it is out of print and fairly rare to find, even on eBay or other Internet sites. But you got to preview right here!

2 Responses to BOOK REVIEW: A Visit to the New York World’s Fair