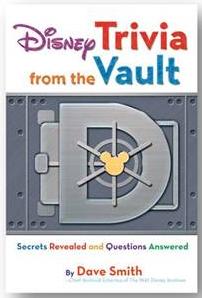 Author: Dave Smith
ISBN: 1423153707
On Sale: 06/26/2012
Price: $9.99 US / $10.99 CAN
Ages: 12 and up
Imprint: Disney Editions
Description: Beginning with the July 1983 issue of Disney Channel Magazine, Dave Smith began answering Disney trivia questions from viewers of the Disney Channel. “Ask Dave” questions have come from Disney enthusiasts the world over, and have covered topics ranging from Cinderella’s last name (Tremaine) to the number of triangles covering the surface of Epcot’s Spaceship Earth (11,324 facets comprising 954 triangles.) Over 1,100 questions have been fielded by Dave Smith, the now-retired Chief Archivist of The Walt Disney Company, and this book is a compendium of the most interesting and revealing of those queries.
Review: The book starts with a one-page introduction by Dave Smith himself. He talks about the early beginnings of his connection with our Disney questions as the Chief Archivist of the Walt Disney Archives. He drifted from one publication to another until finally resting on the Internet on the D23 Web site, we he can be found now.
But many books have come out of Dave’s congenial willingness to answer an unending stream of Disney questions! The latest of which is this one: Disney Trivia from the Vault.

After this brief introduction, Dave just dives right in with the first question, and doesn’t stop until the last page. There are no pictures in this book and no appendix, but the book is divided into 8 sections. I’ll list them for you, with one teaser for each:

Animated Features – Did Richard Chamberlain have anything to do with the Little Mermaid? Animated Shorts – Did Walt Disney ever draw Mickey Mouse for the screen? Disneyland – How many babies have been born at Disneyland? Live-Action Films – Were the Nannies in the street in Mary Poppins women or men? Publications – What year did Scrooge McDuck first appear in a Disney comic? Television – What was the movie in which Kurt Russell starred as a young rebel soldier? Walt Disney World – Pluto belonged to two other owners before Mickey. Who were they? Walt Disney – Is it true that ‘Disney’ is a changed version of Walt’s family’s original name?

I hope these 8 teasers have whet your appetite for this book!

I’d give this book a 3.5 stars out of 5 for the serious Disney fan, just because many of the facts given have been available before. But for casual or new Disney fans I would raise the score to a 4. The book is a treasure trove from the man who knows all, so should be on the bookshelf and in the hands of anyone who has ever asked a Disney question!

I’d like to thank Disney Publishing Worldwide for sending me this preview copy.