While at Walt Disney World on our last trip, this Blog’s founder, Lee, asked me to pick up these 9″ Humphrey and 3″ Ranger J. Audubon Woodlore Vinylmations from D Street at Downtown Disney.
. 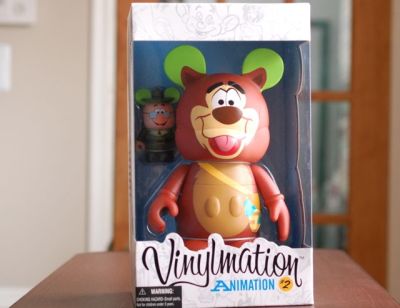 .
Now, at $74.95, I thought I’d never get a 9″ Vinyl, but when I looked at it, and reminded myself, there really isn’t a whole lot of merchandise featuring Humphrey, one of my all time favorite characters, I went ahead and picked one up for myself as well! And it is a limited edition of 1200!
.
Below, from the box, we see other limited edition vinyls from the Animation #2 Series.
.

.
For readers unfamiliar,  Humphrey and Ranger J. Audubon Woodlore featured in classic Disney cartoon shorts in 1950s and 60s, often pitted against one another or Donald Duck as a hapless tourist. You can find Humphrey today on the Totem Pole at Disney’s Wilderness Lodge and on signage around Storybook Circus at the Magic Kingdom at the Walt Disney World Resort.
. 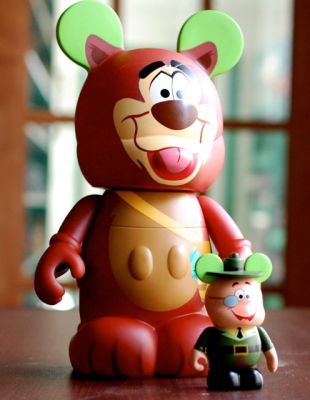 .
Despite the fact these are limited edition figures, I wasn’t keeping them cramped in their box, and liberated them. Their arms and head are articulated.
.

.
.
The cartoon being represented by these figures is from 1956 short cartoon, “Hooked Bear“, which can be found on the Disney Treasures set, “Disney Rarities: Celebrated Shorts: 1920s-1960s”.
.