BOOK REVIEW: Who’s Afraid of the Song of the South? 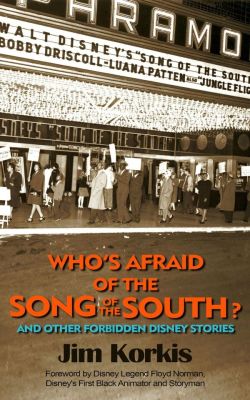 .
Author: Jim Korkis
.
Publisher: Theme Park Press (Editor – Bob McLain)
.
Type: Soft Cover
.
Pages: 276
.
Price: $19.95 US (Kindle $7.99)
.
ISBN: 978-0-9843415-5-9
.
Press Release:
.
Disney historian and best-selling author Jim Korkis is not afraid of the classic but forbidden Disney film Song of the South.
.
So who is afraid of it?
.
The Disney Company, as Jim explains in his new book Who’s Afraid of the Song of the South? And Other Forbidden Disney Stories, available now from Theme Park Press. In his book, Jim provides the first definitive account of the film, its history, its production, and the controversy that still surrounds it. Is Song of the South racist? Is it inappropriate for modern audiences? Why has Disney refused to release the film theatrically since 1986? Using a multitude of sources, including personal interviews with those who worked on the film, Jim examines every aspect of Song of the South’s troubled and troubling history: the problems writing the screenplay, the background of the live actors, how the animation was created, Walt Disney’s personal contributions, why the film remains controversial today, and every other aspect of the film you can’t but should see.
.
The book features a lengthy foreword by Disney Legend Floyd Norman, Disney’s first black animator and storyman.
.
Who’s Afraid of the Song of the South? isn’t just about the film. Jim also shares seventeen amazing — and equally forbidden — stories the Disney Company wishes were never told. You’ll learn about Disney’s sex education film, Walt’s plan for Mickey Mouse to commit suicide, Tim Burton’s depressed stint at the Disney Studios, Ward Kimball’s UFO obsession, Walt’s owl nightmares, the Disneyland Memorial Orgy poster, and lots more.
.
Jim’s authoritative but friendly and accessible style makes Who’s Afraid of the Song of the South? a treat not just for film buffs and academics but for Disney fans everywhere.

When I read books on Disney or Disney history, I usually end up learning a lot of things I already know, albeit in a new and/or entertaining way. So I’ve come to accept this and not judge a book to harshly for that fault. After all, I’ve read so many books on Disney by now that I challenge any author to surprise with me something new!
.
So in that regard, I have to say: ‘Thanks for the surprises, Jim!’ Mr. Korkis has put together a very entertaining book that connects all of the little bits of information you may already know about Song of the South, and adds them to a whole bunch of new stuff you don’t know. And context is everything, and is what this book delivers in spades!
.
If you’re a Song of the South fan (and who isn’t?) and like me are ready to march on Disney’s corporate headquarters to demand a BluRay release, you must read this book first!
.
But wait, that’s not all! The second section of the book (explained above in the Press Release) is just as entertaining. Suicide, UFOs and orgies. Need I say more?
.
Everybody says that ‘I couldn’t put it down’ when reviewing a book, but in this case, it just happens to be true! Jim Korkis is one of those writers who manages to get volumes of facts across while never losing sight of the entertaining value of the printed word.
.
Conclusion:
.
I don’t often give a book 5 out of 5 stars, but in this case, I’m going to. I can’t think of any way that this book could have been better. Pictures maybe? Actually, Jim’s writing is so colorful, pictures wouldn’t have augmented the book at all. Final words: Buy it!
.
I’d like to thank Theme Park Press for making me pay for this review copy
.
LOL – It was worth it!
.

2 Responses to BOOK REVIEW: Who’s Afraid of the Song of the South?