There was a time when anything the Bradford Exchange slapped on a plate sold for $50.00 or more and promises of great increases in value filled collectors heads with dreams of big profits in the future. But the reality became that the bottom dropped out and now you can pick these same plates up for $10.00 each at almost any flea market. Sometimes framed!

But that doesn’t mean that plates aren’t still a great thing to collect. Especially Disney-themed plates like this one: 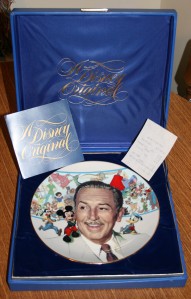 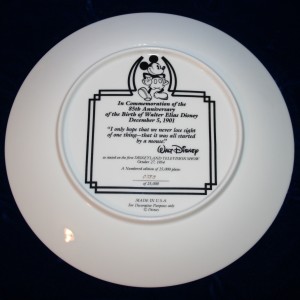 Commencing December 5, 1986, we celebrate the 85th Anniversary of the birth of Walt

Disneyland artist Charles Boyer, known for his many years of creating beautiful paintings and sculptures commemorating special Disney milestones, did the illustration for this magnificent plate. This particular one is number 783 of 25,000.

It comes complete with a box, box cover, explanatory pamphlet, and because the lady I bought it from was diligent, the original sales receipt! 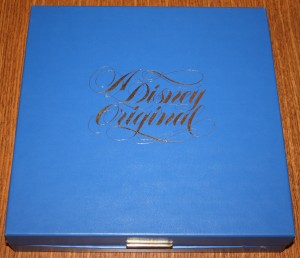 Enlarge and enjoy the reading!

This particular plate was bought on Main Street in The Magic Kingdom (WDW) on November 18th, 1988 at 7:09 p.m. Debbie, the lady I recently purchased it from, bought it to decorate her then young daughter’s room. But now that the daughter is grown and has left the nest, the Disneyana had to go.

But like I mentioned at the outset, the value of these plates is hard to maintain, and so I paid only $25.00 CAN to obtain it for my collection.

As with any collectible, if you have the full story of how it was purchased, where it has been, and who has owned it, you can rightly lay a claim to increased value. But for me, it’s never the money that matters: I just love a good story!