Mickey Mouse may have gotten his own club, complete with Mouseketeers, but Donald Duck certainly got his share of admiration! There was even a time when his popularity eclipsed his mousey cousin, appearing in more Disney films than any other character.

And he even got his own song. The Donald Duck song was the theme for his cartoons from 1947 to 1959. Today, it stands as the official theme song for Donald Duck. Here are the lyrics:

Who’s got the sweetest disposition? One guess — guess who! Who never never starts an argument? (Woman: Hmmmm?) Who never shows a bit of temperament? Who’s never wrong but always right? (Donald: Yeah?) Who’d never dream of starting a fight? (Donald: That so?!) Who gets stuck with all the bad luck? No one… (Donald quacks angrily) but Donald Duck! (Donald: Yeah!)

So in honor of our feisty little fowl, I thought I’d share a few of the figurines of him that I’ve collected over the years: 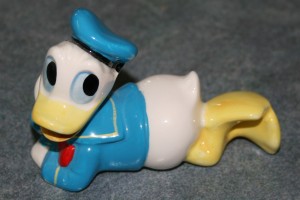 Who’s got the sweetest disposition indeed! 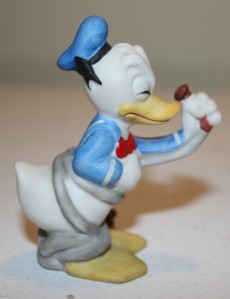 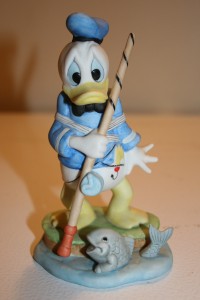 Many figurines depict Donald in one fix or another 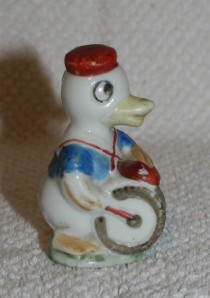 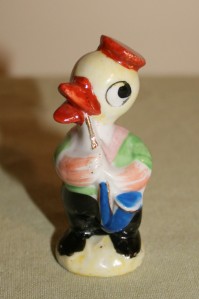 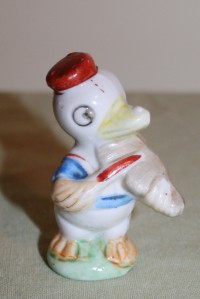 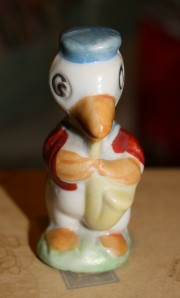 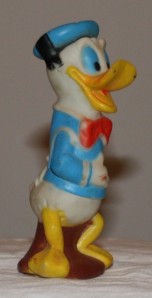 The hornpipe is any of several dance forms played and danced in Britain, Scotland, and Ireland from the late 17th century until the present day. It is said that hornpipe as a dance began around the 16th century on English sailing vessels. Movements were those familiar to sailors of that time: “Looking out to sea” with the right hand to the forehead, then the left, lurching as in heavy weather, and giving the occasional rhythmic tug to their britches both fore and aft.

Donald’s first appearance was in The Wise Little Hen (1934), but it was his second appearance in Orphan’s Benefit that introduced him as a temperamental comic foil to Mickey Mouse. The great Clarence Nash (December 7, 1904 – February 20, 1985) developed and supplied his signature voice for almost 50 years.

Our last figurine shows Donald in just one of the many roles he’s played over the years: 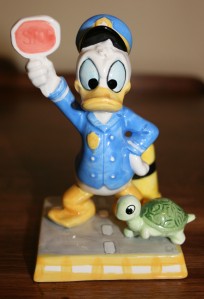