Is Disney Becoming too PC?

It is interesting to me that by even asking that question, I may not be Politically Correct! To wonder if anyone has taken this non-offense initiative too far is to invite criticism. So when is being Politically Correct really too much?

The simple answer is: When it ignores history.

Take Song of the South for instance. This film is likely never to be re-released any time soon. It is apparently thought that it would spark more controversy over the racial problems of the past, and perhaps inflame some of the prejudices that still exist today. But I wonder if burying such a movie will make such controversy disappear? It’s unlikely. 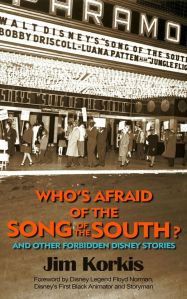 The fact is that this film was made. It was released. It had an impact. And so I believe it should have a place in today’s society.

Take also the portrayal of smoking in Disney films. Now, I agree that we don’t need our children to see their favorite Disney character puffing away on a Virginia Slim. Can we imagine Ariel lighting up while relaxing on a rock after a hard day’s swim? Mickey pulling out a pipe on Mickey Mouse Clubhouse and then breaking into a song all about the joys of smoking? Neither scenario is appealing!

But neither is denying that Disney characters have always been depicted as smokers if the story and situation called for it. Like Pinocchio when he was making an ass of himself:

Or Cruela de Ville with her iconic long cigarette holder. And we have to remember that Walt Disney himself was unapologetic about his own chain-smoking (although he did keep it off-camera.)

There was a series of TV commercials depicting Disney characters having bad experiences with smoking, like the aforementioned Pinocchio. The overlaying narration suggested that smoking was bad, so that is a good use of this old footage. But should this old footage be changed, perhaps edited out of the Classic films altogether? The answer appears to be ‘yes, as Disney is going through its Classic catalogue and removing such offending footage!

In conclusion, we might ask: Should the PC movement have the power to, not only ignore, but to change history? Maybe that should be the true controversy!

2 Responses to Is Disney Becoming too PC?