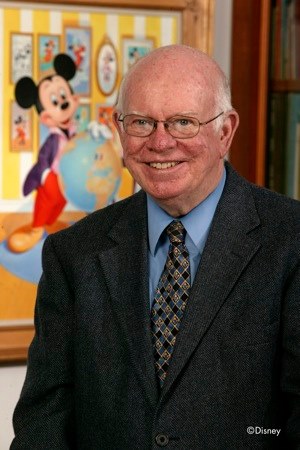 BIO: With the establishment of the Walt Disney Archives on June 22, 1970, Dave Smith joined The Walt Disney Company as the director of the Archives. As the company’s Chief Archivist, Dave was charged with collecting and preserving all aspects of Disney history and making the material available to researchers from all areas of the company. Since the company is often working on projects which reuse elements from its past, there is constant call upon the Archives for information. The Archives also answers mail, email, and telephone inquiries from the public.

In the years since the Archives was established, it has grown from a one-person department to a current staff of eleven. The Archives is located at the Disney Studio in Burbank. It has come to be recognized as a model among corporate archives in the country, and now, even though retired, Dave is still regarded as the final authority on matters of Disney history.

Born and raised in Pasadena, California, the child of librarians and educators, David Rollin Smith earned a B.A. in history and a Masters Degree in Library Science from the University of California at Berkeley. Before coming to Disney, he received library and archives experience working in the Manuscript Department of the Huntington Library in San Marino, having an internship at the Library of Congress in Washington, D.C., and serving on the staff of the Research Library at U.C.L.A.

As the Disney chief archivist Dave was an active member of the Society of California Archivists. He served from 1980 to 2001 as Executive Director of the Manuscript Society, an international association of collectors, dealers, librarians, archivists, and others interested in manuscript material.

Dave has written extensively on Disney history, with a regular “Ask Dave” question and answer column in the former Disney Magazine and Disney Channel Magazine, online on the Disney Insider, and on the D23 website, as well as numerous articles in such publications as Disney News, Starlog, Manuscripts, The American Archivist, and The California Historical Quarterly. Dave is the author of the official Disney encyclopedia Disney A to Z (1996, updated editions in 1998 and 2006 and 2015). With Kevin Neary he co-authored The Ultimate Disney Trivia Books 1, 2, 3, & 4. His book, Disney: The First 100 Years, co-authored with Steven Clark, was published in 1999 (with an updated edition in 2002). He compiled The Quotable Walt Disney, a collection of Walt Disney’s quotes, in 2001. He has written introductions to a number of other Disney books, and often lectures on Disney subjects. Dave’s latest book Disney Trivia from the Vault (2012), compiles 29 years of questions and answers from his “Ask Dave” column. In October 2007, Dave was honored with the prestigious Disney Legend award.

A Burbank, California, resident, Dave retired in 2010 after passing his 40th anniversary with The Walt Disney Company, but he continues work as a consultant with the title of Chief Archivist Emeritus.

I know, I hadn’t heard of him either until I read the bio. Yeah, right! Like everyone else, I’ve always enjoyed reading Dave’s books and seeing him on various Disney videos. His humble and friendly manner just draws you in. I was thrilled when I first met him… on Facebook. Hey, maybe someday I’ll meet him in person!

But this post is all about the interview, so let’s get right to the questions:

Q1 – What would be your Disney dream job if you couldn’t be involved with the Archives?

Dave: It would be hard to think of a dream job better than the one I had as chief archivist. I’m not really qualified for any other jobs with the company.

Q2 – What is your favorite piece of Disneyana in your personal collection?

Dave: I don’t really have a personal Disneyana collection (I always felt that it would be a conflict of interest), but I do have signed copies of many of the books on which I helped out the authors. I also treasure the Walt Disney signature I have. When I ran into Walt as a teenager at Disneyland, he declined to sign an autograph because it caused crowds to gather around him. But, he told me to write him at the Studio. I did, and he sent me the autograph.

Q3 – What is the question you get asked the most that you have the hardest time answering?

Dave: I dread the “why” questions; why did Walt do something, etc. If it isn’t written down or in an interview, then an answer is not known.

Q4 – How comfortable are you with your Disney celebrity? Does it surprise you?

Dave: It is hard for me to consider myself a Disney celebrity, but I guess I am. Most Disney fans seem to know who I am, and they appreciate the work I did at the Walt Disney Archives.

Q5 – How would the Disney Company be different if Walt was alive today?

Dave: It is hard to guess what Walt would have done with the company had he lived longer, but since he was an innovator and willing to take chances, we might have progressed to where we are today even faster. He certainly would be impressed with the technologies and opportunities of today that were not available to him during his lifetime.

EPILOGUE: I’m constantly amazed at the graciousness of Disney personalities! I truly appreciate Dave taking the time out of his busy schedule to grant this interview for Disney Nouns. I hope you feel like you know him a little better now.