Monday Topics: Looking Back at Disney

LOOKING BACK AT DISNEY

Our friends over at Love Our Crazy Life have asked some of their blogging friends (like me) to participate in a Blogging Challenge. So for four weeks in April, on every Monday morning, I will be covering a different Disney-related topic. You can click the link above to find all of the other participants and their entries. Enjoy!

I struggled with this topic, so it was fortunate for me that it came last in the series! I thought of doing a comparison of Disney then and now, but that would take too much time. I thought of doing a pictorial of me in 1972 at Walt Disney World versus me in modern times. But I have too few images for such a post. So what to do?

Why not do the unexpected, or inexplicable? So welcome to my post that looks at the back side of Disney!

Back Side of Sleeping Beauty Castle (Disneyland model)

Disney Legend and Imagineer Herb Ryman designed Disneyland’s iconic Sleeping Beauty Castle. Now, the infamous story of how this castle got turned around may be apocryphal, or it may be true, but it certainly is entertaining. Herb says:

“One thing that he (Walt) insisted upon was that there be a very, very conspicuous castle, because the castle is going to be the symbol of this whole place. Fred Joerger had done a beautiful model of this castle. When I saw it I said, ‘I don’t like it.’ So I took a look at the castle model, grabbed a hold of the upper portion of the model, and turned it around so that the back of the upper portion now faced the front. ‘Dick said, ‘Now, Herbie, quit playing with it. Put it back. He said ‘Walt’s going to be here any minute, and Walt won’t like it. Turn it around. Put it back.’”

But time ran out and Walt saw the altered version. And loved it! So the whole thing was built around the wrong way. So when you visit Disneyland and take a picture of the front of the castle, your picture will turn out backwards!

Back Side of Water (Jungle Cruise) 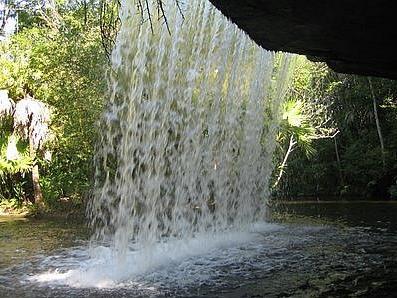 I’m constantly amazed at how many times Disney is able to get us excited about simple and common things. Millions of us take pictures of trash cans just because they are color-coded to the Land they are in. Many of us enjoy a bus ride, even though we have to wait too long to get on one and they take forever to get anywhere!

And then there is the back side of water.

A simple gag line from a corny attraction has caused more cameras to click and more people to groan than any other naturally occurring substance in the World!

Back Side of Disney Cruise Ships (Disney Wonder)

Each of the ships in the Disney Cruise Line have a distinctive character tableau attached to the back. Historically, most sailing ships would stick a figure on the front, such as Pirate ships. But Disney just had to be different!

They are almost impossible to see from the ship themselves, so take your pictures before you board. I guess Disney just wants to give those ocean-going tailgaters something to look at!

Back Side of Disney Clothing (Mickey T-shirt)

OK, that’s just rude! But I’m sure Mickey is just being playful as he takes a backwards peek at us. There are many different designs in this theme, showing us the back of characters instead of just another view of the more familiar fronts.

But be careful: You may not know if you’re coming or going when wearing one of these!

And there you have my look back at the back side of Disney. I wonder who else would have thought of this angle for Looking Back at Disney?!

Be sure to check out all four of my posts in this series of Monday Topics:

Topic Four – Looking Back at Disney (You are here)