For those unfamiliar with Stan Lee, all three of you, this is called a ‘marvelous memoir’ because Stan the Man brought a comic book company named Marvel to fame and prominence while doing quite well for himself along the way. He created, along with a team of talented artists, heroes like Spiderman, The Fantastic Four, The Incredible Hulk, and at least a few others.

If you attend super hero movies then probably you know him as the man who shows up in a cameo role. He looks like Hugh Hefner. He’s always smiling. He pretends to be full of himself. And he is one of the truest characters left in entertainment today.

Front and back sleeve art

This book sold for $30 US or $36.99 CAN but I got it for just $10 CAN on clearance which should in no way reflect on its quality and value unless you’re a nit picker and consider the fact that the book only came out on November 3rd of 2015 and thusly it is a bit early for such a deep discount. But I digress. But so does Stan in his memoir, so I feel justified!

As I said, this book is presented in comic book form: 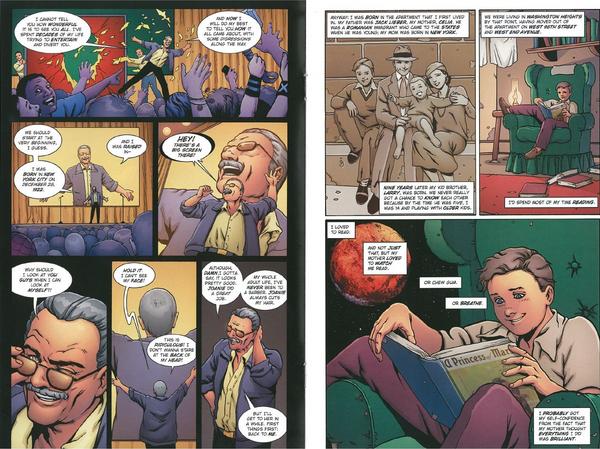 It starts with Stan appearing at a convention to tell his life story. He does so in his signature bombastic style with lots of dramatics and regressions. So he digresses. But so do I in this post, so he’s justified!

The artwork is entertaining without being too realistic, or realistic at all. It harkens back to a simpler time when comic art had energy and pizzazz in every panel.

The book is definitely a highlights-only volume with no new insights offered. We’ll probably have to wait until The National Enquirer does an expose to learn the real truth about this comic book icon. Did you know that Stan has also penned stories for Marvel’s arch rival company DC Comics? Did you know that ‘DC’ stands for ‘Detective Comics’ so when you say ‘DC Comics’ you’re actually saying ‘Detective Comics Comics’? But I digress. But so does Stan in his memoir, so I feel justified!

I’d give this memoir a 3 out of 5 Stars for the general public as they are unlikely to appreciate or understand Stan’s writing style and self-aggrandizing fakery. But for die-hard Marvel Comics fans I would give it a 5 out of 5 Stars and say that if you are one of them and haven’t bought and loved this book yet then you should turn in both your MMMS membership card and every issue of FOOM magazine that you have.