I’ve been looking at this merchandise line for some time but haven’t found a character that I truly liked. The Kristoff doll from Frozen came close but I just hate that movie so much I couldn’t bring myself to buy him!

But before we go much further, what exactly is the Disney Animator’s Collection? From the back of the packaging: “Celebrating the heritage of Disney animation with the Disney animators’ collection, created under the guidance of Disney’s most renowned animators and designers, these young renditions of your favorite characters are brought to life with creativity and imagination.“

But at a local Disney Store I finally found the one character that I think looks the best with this treatment:

This doll was designed by Byron Howard who worked on Pocahontas, Mulan, Brother Bear, and of course, Lilo & Stitch.

The packaging for this merchandise line is quite good. The character studies around the box are nice and the information on the back fully explains the intent of the product. 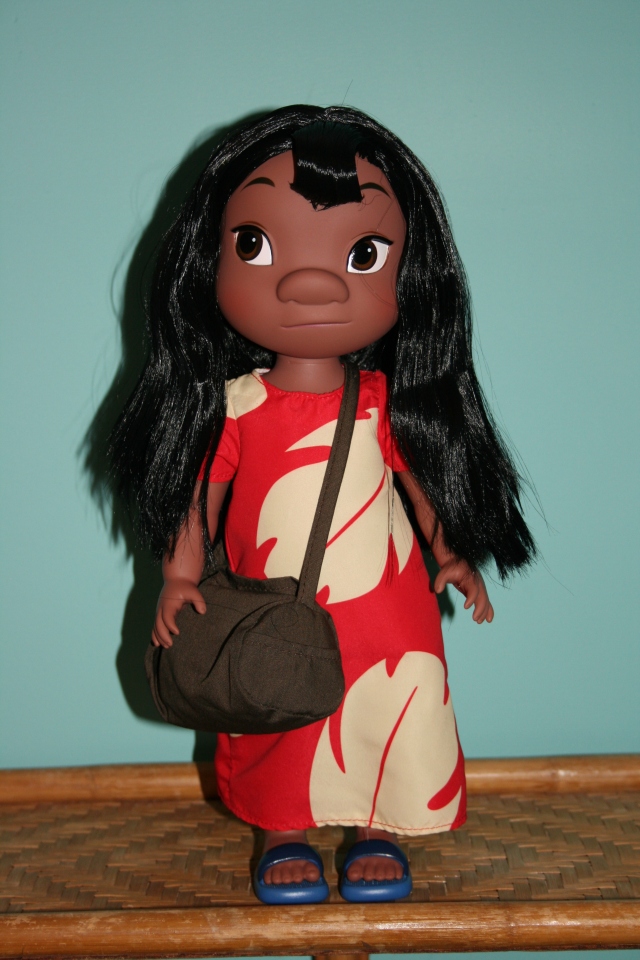 These dolls all have the same body with legs that will bend at the hips for a sitting position, arms that pivot at the shoulders, and a head that turns. The only thing different between the dolls is the head sculpt, hair, and costuming.

Lilo’s flip-flops come off as does her satchel. Her homemade dolly Scrump can be carried in the satchel or put on her wrist using a strap attached to the back. Of all the dolls in this series, I think the expression on Lilo’s face best represents the character.

The Disney Animators’ Collection line sells for $24.95 US or $26.95 CAN. This line has been available for some time and I don’t think it’s doing too well. There is always a good selection available at The Disney Store whenever I go which tells me they aren’t flying off the shelves!

FUN FACT: I noticed another doll for sale at The Disney Store which was from the up-coming animated feature Moana. The doll may have been a child version of the main female character herself, Moana. The interesting thing was that the body of the doll was identical to the ones used for the Disney Animators’ Collection line and the packaging was identical in shape but with different graphics.

So why didn’t Disney just release this doll as part of the Animators’ line?