We’re back in the die-cast business again today as we check out a beloved character from the Star Wars series of movies. I’m a ‘original three’ fan (Star Wars fans know what that means) and was guardedly optimistic when I heard that Disney would be chartering the course for future installments in the franchise. But with Star Wars: The Force Awakens I was able to put my fears to rest!

But through all the ups and downs of this blockbuster mega-hit has been the little droid with heart, R2-D2: 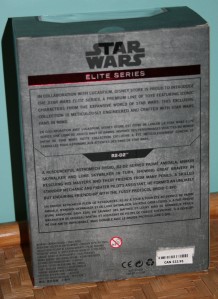 There is a whole line of Star Wars characters in this series exclusively at The Disney Store. The packaging is very well done and I considered leaving the little astromech droid in his paper pod. Usually a collectible figure will retain a higher value if left in its original packaging but here’s why I released him.

With the crash of the collectibles market in 1986 prices have plummeted. In or out of a box these items just aren’t selling like they used to. Add to that the tendency for companies like Disney to release ‘collectible’ toys in ridiculously high production numbers and you can see why there is no point preserving (M.I.B.) or collecting multiples of this line.

That all said, I recommend picking up some of these excellent action figures! The R2-D2 example is very well done with a commendable level of detail. His side arms allow him to pivot forward and backwards and his center ‘foot’ pivots as well.

He can also do a balancing act:

What I was disappointed in was that his head does not swivel. Being a solid lump of die-cast metal though I guess I can understand that it would have been hard to achieve this. But it would have taken this action figure from excellent to awesome!

The benefit of un-boxing the little guy is that he comes with a display plate that you can use to show off your resourceful droid:

So will you be adding one of these action figures to a display cabinet in your living room?