When you first heard the lyrics “Off we go, into the wild, blue, yonder! Off we go…” you probably weren’t thinking of doing so in a car. Standard airplanes are the vehicles of choice for the sky! But that was not always the plan.

Andrew Glass has put together an interesting chronological listing of flying cars starting from 1901 to the present. He accompanies the facts with little asides about the inventors and the times they lived in, their successes and oft-times spectacular failures. 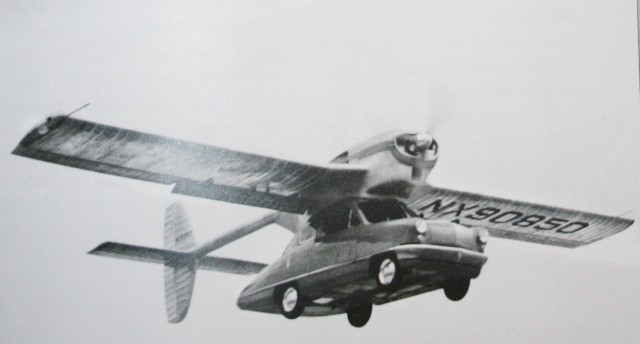 How could you not want one of these?

Famous people like the Wright Brothers, Amelia Earhart, and famous classical conductor Leopold Stokowski (of Fantasia fame) all followed the progress of the technology with the last two names actually ordering their own flying cars! Unfortunately, the models they ordered were never put into production. In fact, no flying car has ever been put into production.

But that hasn’t stopped inventors from continuing to design and build prototypes right down to our day. 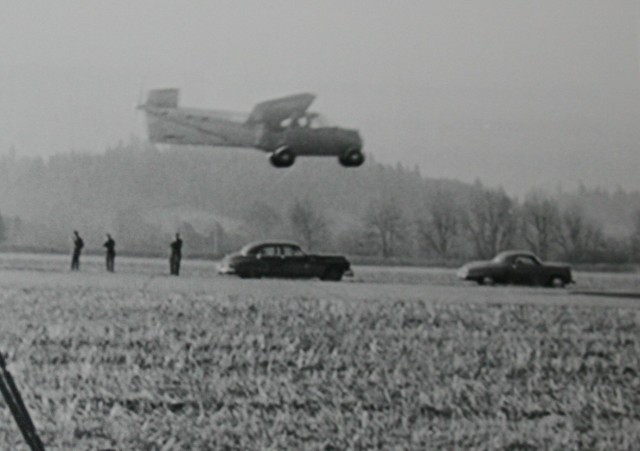 If you can drive, why not fly?

The thing that stood out for me in this book is just how close North America came to having flying cars in every garage. Plans were made to position runways next to major highways so commuters could take off and land right next to their freeway exit. One visionary even claimed that rush hour traffic would be eliminated as more and more motorists took to the skies!

I guess no one envisioned traffic jams in the clouds.

Claims were made that flying one of these babies was as easy as driving your family car. After you learned how to attach and detach the wings and flying controls of course!

I first became aware of flying cars while watching the Disney/Pixar movie Planes which featured a German flying car named Franz Fliegenhosen. He is rendered to be a German 1954 Taylor Aerocar:

Real or ‘invented’ by Pixar?

Below is a picture of an actual Aerocar from 1949 designed by Moulton B. Taylor:

Real. But Pixar gussied it up a bit for the movie

What is the same between this real flying car and the one Pixar ‘invented’ is that the Aerocar was the only flying car to carry its plane components behind it on a trailer, like Franz does in the movie. All other models were designed to leave the fuselage behind at an airstrip.

So there you go. For over 100 years inventors have been working on a way to get your Hyundai airborne. The book is chock full of freaky-tiki examples, including my favorite idea, the flying Ford Pinto (it crashed. The idea was abandoned.)

Review: I would give this book a 5 out of 5 Stars but perhaps only 4 Stars for the average reader. It is basically just a chronological look at flying cars, so if you are not interested in the subject matter, you won’t likely be entertained. However, Glass does find the humor in flying cars, if you can imagine that.

My conclusion after reading the book? I. Want. A. Flying. Car.